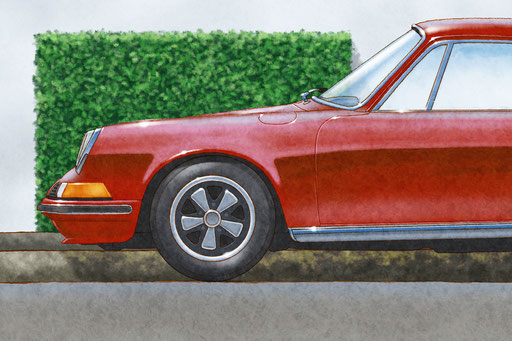 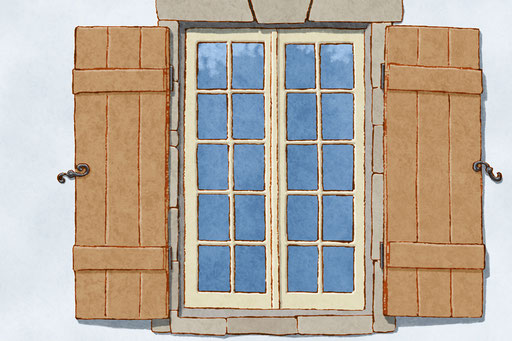 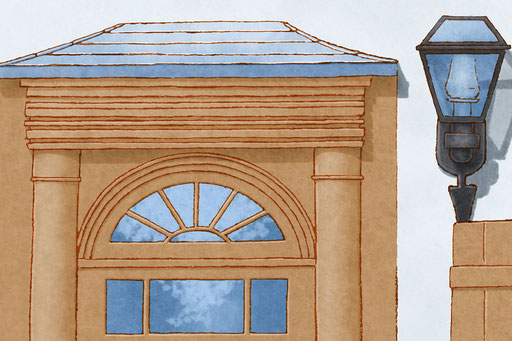 DESCRIPTION OF THE ARTWORK

This piece of art represents a Quebec City house looking like the New France era (1760 and less), Drawn in front view, it is built on 6 Côte du Palais street, in the fortified part of Old Quebec district. Park in front, a Porsche 911 (circa 1970) dress with a dark red color.

WHERE IS THE INSPIRATION

It is very easy to find inspiration during a visit in the Old Quebec district! The building represented reminded me of what can be seen in the north of France, especially in Brittany. The door is rather typical of houses built in Old Quebec.

As for the car, having visited Brittany, after attending Le Mans Classic in 2008, I realized that after having seen nearly 1000 Porsche of all generations there, I would go for a 911 model, well known to the public.

The car represented on this artwork is a first generation of the Porsche 911. It can be dated after 1969 due to the higher  head rest, mandatory on the American market.

POSTAL DELIEVERY SPECIFICATIONS
- The image printed on paper and on unmounted canvas will be ship roll in a tube for shipping safety.
- A tracking number will be included for security.
- A signature will be requested on reception of the print.

Printed on tick semigloss paper or on artist canvas.

The work presented on this page is offered in limited edition, hand signed and numbered by the artist, giving the product, a greater exclusivity of possession.

The artist wishes to recall that this work is the fruit of a historical research. The production took a good number of hours. All printed art products are produced using the best material "giclée" printing technology available on the market today.

BUY AND PAY WITH TRUST
GARANTEE
Lemire Art.com offers a total 30 days satisfaction guarantee. If you are not completely satisfied with the product you had purchased on Lemire Art.com, please return it for a full refund.
The return of the shipping costs is the responsibility of the buyer. The product must be sent in its original packaging. The total amount is paid upon receipt of the returned parcel.
SECURE SITE SSL
An SSL certificate is a data file that binds a cryptographic key to information on a website.

Installed on a server, the certificate activates the padlock and the "https" protocol in web browsers, to ensure a secure connection. Generally, SSL is used to secure bank transactions, data transfer and connection information, such as usernames and passwords..
SECURE PAYMENT
PAYPAL is the reference in terms of secure payment.

LemireArt.com is a trade verified by Paypal, which indicates that Paypal has done research to confirm that the person is indeed the one that is identified in the Paypal database.

Paypal allows credit card payments without you having to open an account.
GET NOTICED ABOUT NEW CREATION OF THIS COLLECTION!
SHARE THIS PAGE!