HOW THE ARTWORK IS PRODUCE

The drawing was made using a lead pencil HB on a sheet of white paper.

The drawing was scanned and the color applied, using a Wacom graphic tablet and the fabulous Adobe Photoshop software.

All that remains is to print the completed image.

HOW AN AUTOMOTIVE PORTRAITS IS OFFER

When finished, the automotive portrait is printed using a Canon or Epson microscopic inkjet printer that uses 8 to 10 colors for a larger color palette than the commercial printing process.

A non-yellowing paper said to be acid free and pigmented archival inks are used in the production of these "digital art prints", a name used by art galleries and the fine arts museum. This printing technology gives a longer lifespan to the print run of up to 100 years, depending on the frame setup chosen.

IT'S ALL IN THE DETAILS

The Camaro SS have a very sculptural front grill that is sometimes a bit hard to understand the way it look depending of the point of view.

Looking at the front grill, it is possible to see the radiator drawn through it, for more realism.

On the tires, have a look at the lettering Good Year Eagle Supercar F1. These are the tires installed on the 1LEs at the factory, and which will delight the lovers of exact details.

This was a code that added a performance option package on a street Camaro, as well as on race models. Surely our canadian Camaro of the Players racing series were equipped!

Following the presentation of a prototype 1LE in 2011, the name will make a return on a Camaro SS in 2013 with the look that we know today, the hood and wheels matte black color.

2 versions of the print are available in 3 standard sizes according to your purchase budget. They are detailed below.

The maximum size of the custom drawing is 16X24 inches.

Signature on the print: Yes

Numbering on the print: Yes

Certificate of authenticity: Yes
Note: This print is signed and numbered by hand in 25 copies per factory body and strips colors combination. 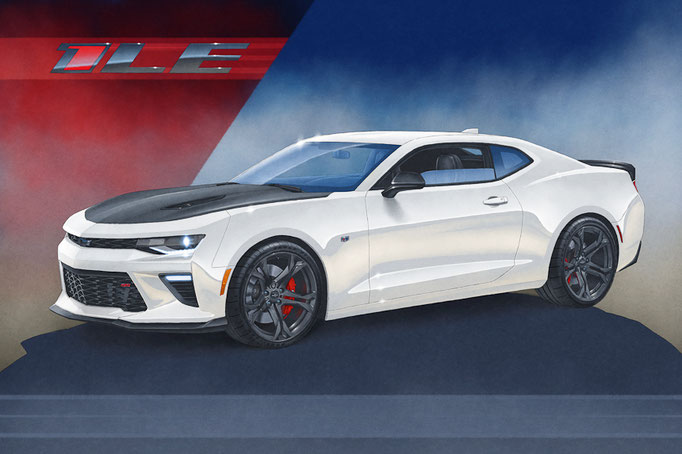 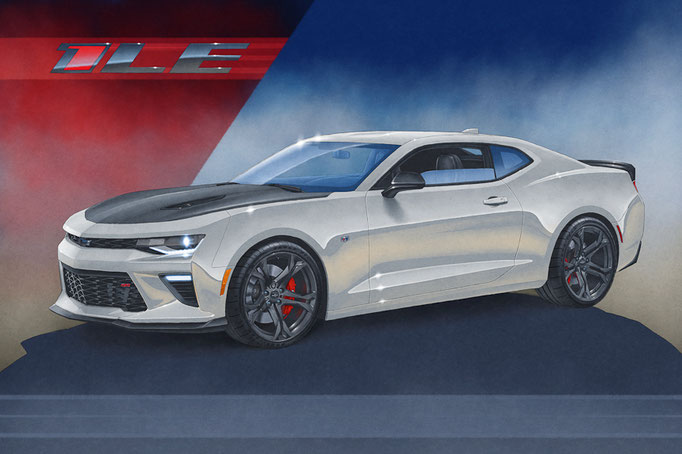 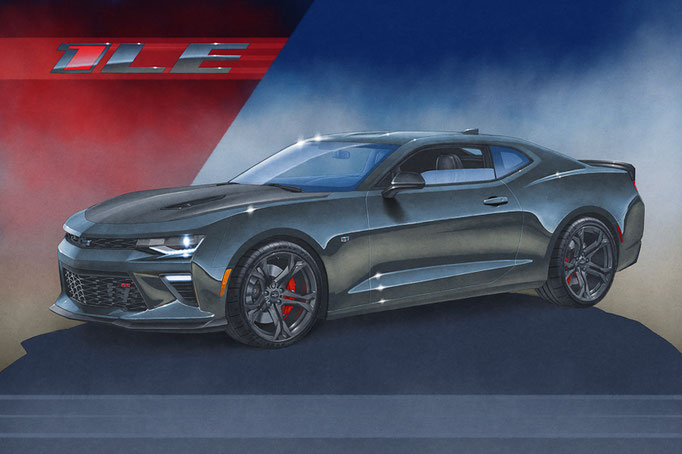 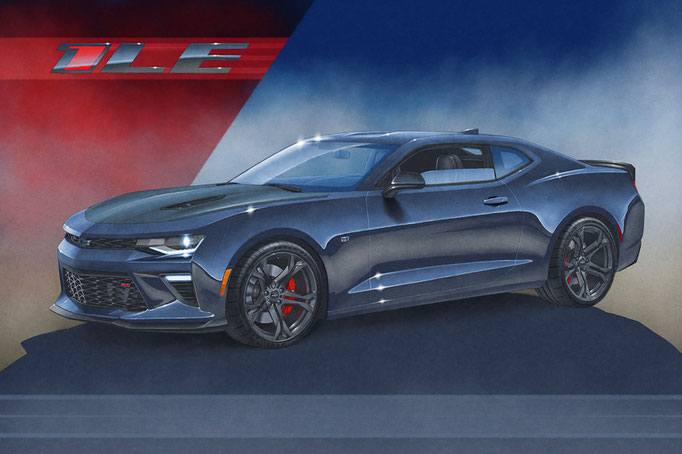 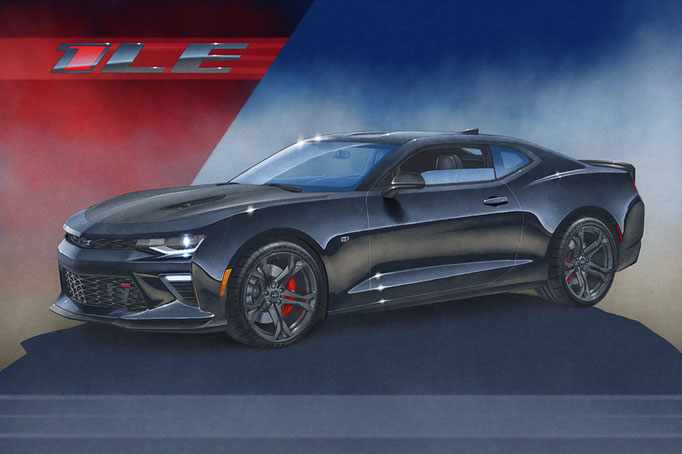 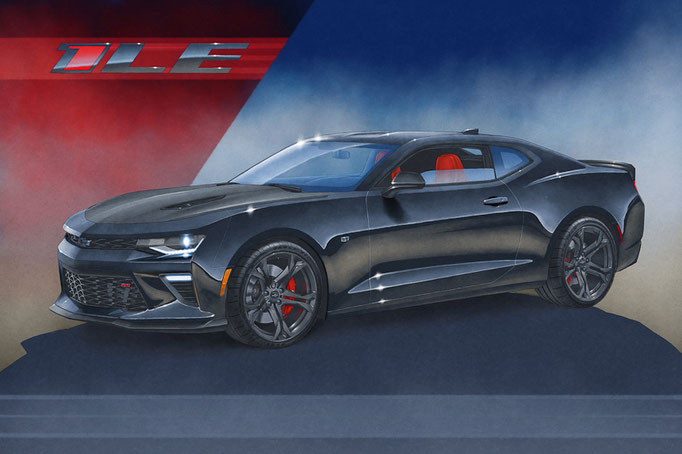 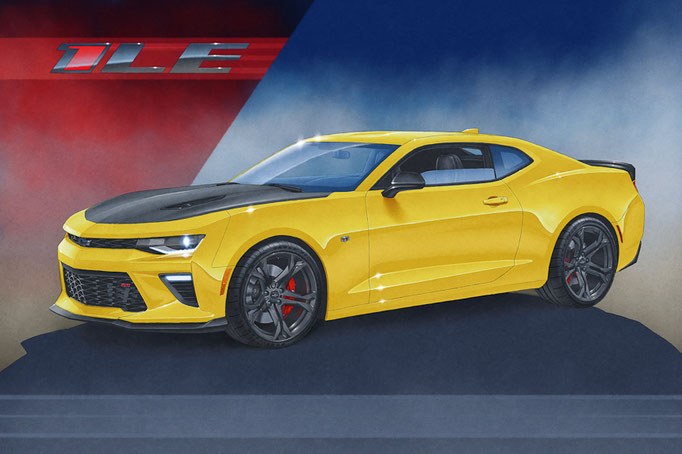 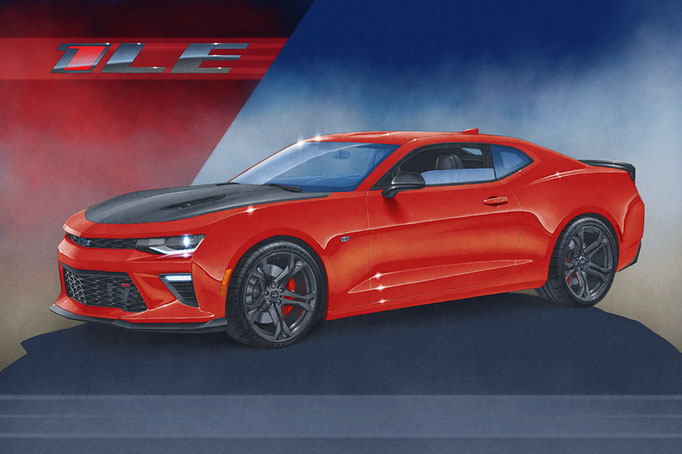 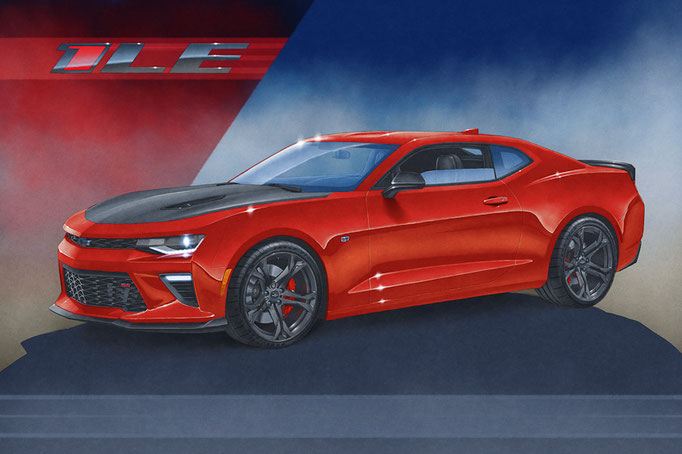 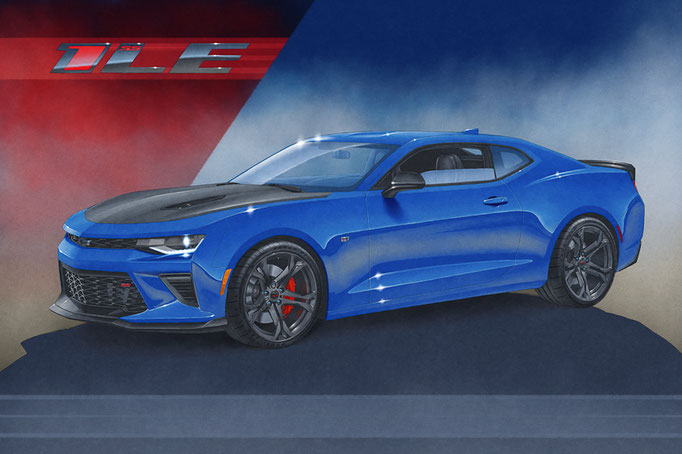 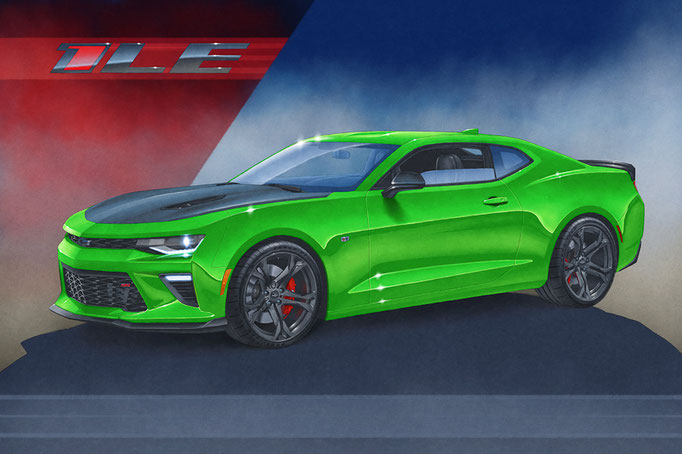 Signature on the print: Yes

Michelin tire lettering: Yes with an extra $10
Note: The owner's edition print is signed and numbered 1/1, because it's the only one to have your car infos written on your print.

• The custom edition is signed and numbered 1/1, being the only one to have the serial number of the car, date of manufacture, date of purchase and the owner's name written at the bottom of the printout.

For all requests of last minutes of purchase, you can contact me:

• Shipping cost to send the print to the USA using the US Post service is US$15 and it's not included in the price.

• Shipping cost to send the print within Canada using Canada Post service is CA$17 and it's not included in the price.

BUY WITH CONFIDENCE WITH PAYPAL

BUY WITH CONFIDENCE WITH PAYPAL

An American couple who owns 2 6th generation Camaro asks me to replicate their car from the Camaro SS 1LE of this page. They seam to like superheroes a bit!

Mister Staples owns a Garnet Red Camaro SS 1LE and added some golden wrapping touch to his car to pay tribute to Iron Man. I replicate those gold areas as shown on his car.

I also replicate the rear spoiler that looks like the one on the C7 Corvette Z06. I also add the side skirt like the owner install on his car.

The background 1LE lettering gets its 3 lines harmonized with the car color scheme for higher exclusivity.

The closeup views down here give a deep look at the drawing work. Madame Staples, choose an Hyper Blue Camaro SS and add some red touches to her car to pay tribute to Harley Queen.

Having the Camaro SS 1LE wheels, like the one on Mr. Staples's car, I decide to keep the same angle of view on both artworks.

Mme Staples have the front grill Chevrolet emblem colored en red and red lettering on top of the car's windshield.

The background 1LE emblem was replaced by the red SS emblem. Another American customer, owner of a Nightfall Gray 1LE asked me a special request.

It was to have the background colored in black and orange. The reason... It was his high school colors for the sports teams of the high school.

Another way of getting an exclusive version of the drawn portrait.

The SS background emblem was colored in dark gray.

MY FIRST CONTACTS WITH THE CAMARO 1LE 6th GENERATION 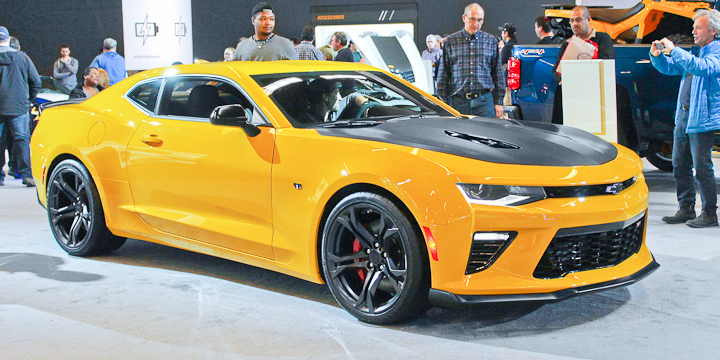 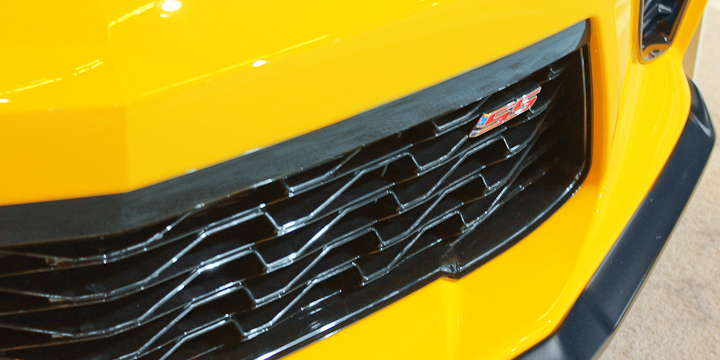 It was at the 2017 Montreal International Auto Show that I had the opportunity to see with it for real, this sublime Bright Yellow Camaro 1LE.

Later in the year, a memorable commemoration of the Camaro 50th anniversary was organized by the car club Les Crinqués from Quebec City.

A 1LE colored Hyper Blue 1LE was on display inside Place Fleur de Lys in Quebec City as well as in the outdoor area of the event organized jointly with Facebook group "F-Body Quebec".

Alain has completed several pieces for me of Camaros I currently own and have owned previously.

They are all framed in my home.  The quality is unparalleled and the attention to detail is nothing short of fantastic.

He is open to creating art that is tailored to my specific vehicles, even down to the color of brake calipers and emblems.

He is quick to respond to questions and always makes sure to check his creations with me before printing. I wouldn’t go anywhere else for something similar. Thank you!

SUBSCRIBE TO THE QUARTERLY LEMIREART NEWSLETTER
SHOP WITH TRUST ON THE LEMIRE ART STORE
GARANTEE
Lemire Art.com offers a total 30 days satisfaction guarantee. If you are not completely satisfied with the product you had purchased on Lemire Art.com, please return it for a full refund.
The return of the shipping costs is the responsibility of the buyer. The product must be sent in its original packaging. The total amount is paid upon receipt of the returned parcel.
SECURE SITE SSL
An SSL certificate is a data file that binds a cryptographic key to information on a website.
Installed on a server, the certificate activates the padlock and the "https" protocol in web browsers, to ensure a secure connection. Generally, SSL is used to secure bank transactions, data transfer and connection information, such as usernames and passwords..
SECURE PAYMENT
PAYPAL is the reference in terms of secure payment. LemireArt.com is a trade verified by Paypal, which indicates that Paypal has done research to confirm that the person is indeed the one that is identified in the Paypal database. Paypal allows credit card payments without you having to open an account.
SHARE THIS PAGE WITH YOUR FRIENDS ON YOUR FAVORITE SOCIAL MEDIA
ABOUT LEMIREART.COM

Since 2001, I have created fabulous artwork for the Lemireart Ebay Store. I also do other kinds of artworks like human portraits, landscape and wildlife art.

As a professional illustrator working for a book editor, I create approximativly 3000 digital illustrations from 1999 up to 2010. They were used in visual dictionaries and reference book and websites.

I hope to have you as a customer soon!

From 2001 to 2013, we're been selling limited edition prints and owner prints on Ebay.

The main subject of the print were muscle, sport and classic cars.

This site was create using the Jimdo.com websites platform